At Rockpanel, we use the natural properties of stone to create products resistant to the toughest conditions. One of the assets of stone fibres, where Rockpanel exterior cladding is made of, is that it’s resistant to humidity and moisture by nature.

Like the source material basalt, Rockpanel facade panels are not affected by moisture. That has many advantages. One of them is that humidity fluctuations cause practically no change to the length or width of the boards, making them dimensionally stable and therefore adding to durability.

In addition, this naturally built-in resistance to humidity means that the boards don’t rot or attract fungus. Finishing the edges to protect them from moisture is not necessary. Any moisture that is absorbed is released directly into the environment without any change to the boards’ mechanical or optical properties. As a building owner, you can therefore be sure that you can enjoy the beauty of your house for decades to come.

Protect your building from fungus and mould with a ventilated facade

Another asset of using Rockpanel cladding is that it enables a ventilated facade construction. This construction has an air gap between the insulation and the facade cladding. This gap is open at the top and bottom and the cladding has small open joints, thus creating a way for natural ventilation of the facade.

A ventilated facade can be viewed as a raincoat: it protects a building against the weather, while at the same time creating a healthy indoor climate. Scientific research shows that a ventilated facade has multiple benefits compared to other building techniques. When a brick or concrete wall is exposed to continuous rain, it will act as a sponge, due to the porous nature of the materials.

Ventilated facades, however, allow for the water to be drained in the cavity and any other humidity to evaporate through the air gap. The facade may get wet in the cavity because of the open joints, but this moisture will evaporate quickly thanks to the ventilation flow within the air cavity.

Ventilated facades do not only protect the exterior of a building, but also improve the indoor climate of a building. A ventilated facade reduces the direct solar impact on the building and reduces thermal movement of the structure itself. With a well-designed/constructed facade, condensation inside the façade build-up can be prevented. Algae and moisture problems do not occur in that case, because the facade is ‘self-breathing’.

Keeping the beauty alive with ProtectPlus!

How can you protect your building from graffiti, scratching and scraping? With our ProtectPlus coating, your façade gets premium protection against graffiti and other dirt. This makes it even easier to keep your buildings clean.

Every single year, the ROCKWOOL Group continues to make progress towards our sustainability goals. Download our Sustainability Report to learn more about our progress, achievements and our new commitments. 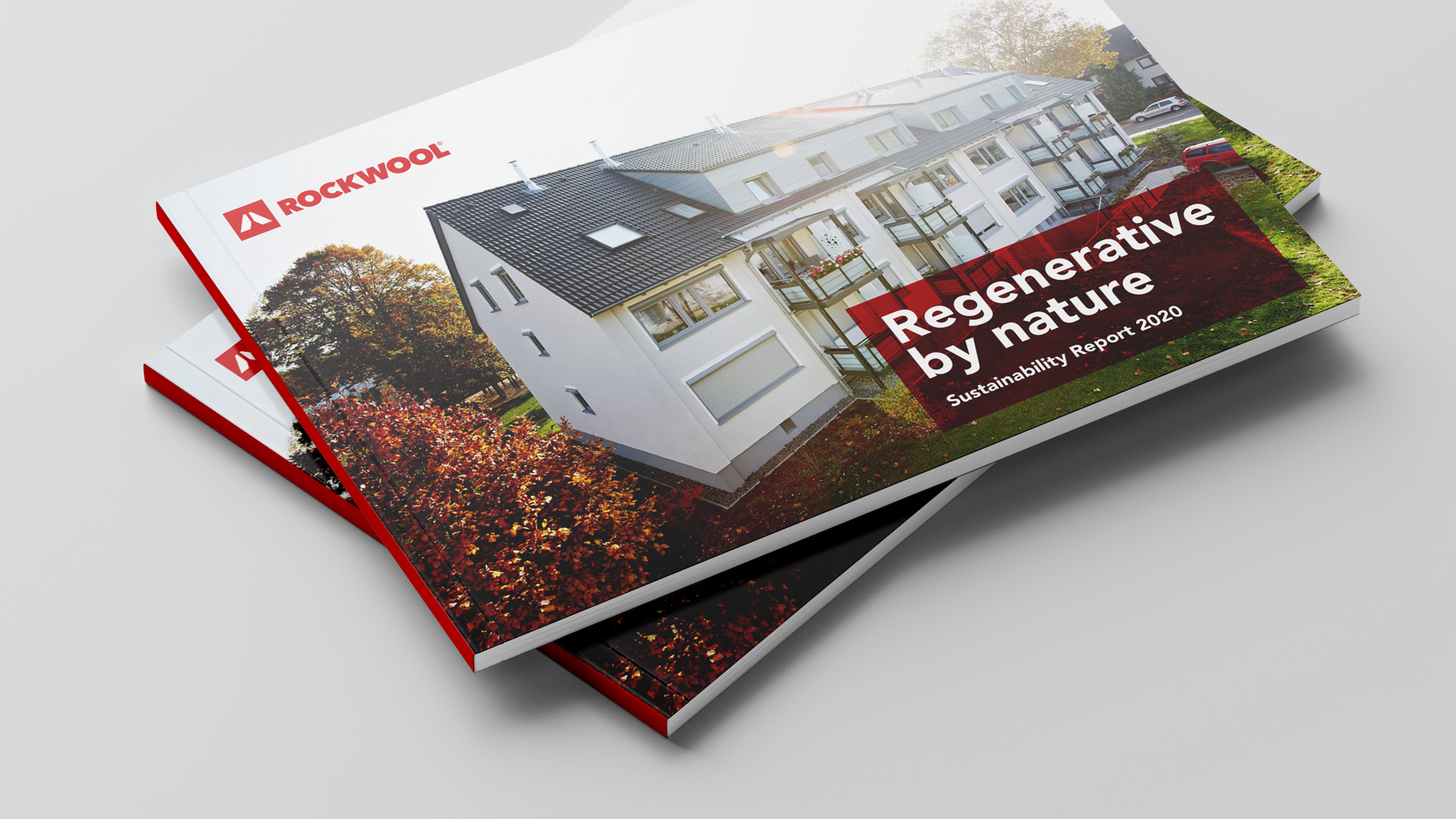 Want to know more about Rockpanel? Just send us your question(s) below and we will get back to you asap!

Want to know more about Rockpanel and Sustainability?

Read all of our related articles below. Just click on the different topics and you will be re-directed to the articles

What is Rockpanel cladding made from?

What is Rockpanel cladding made from?

The core ingredient of Rockpanel facade cladding is a unique natural material: basalt. But what is basalt exactly? And why is it such a sustainable material?

Read more
How sustainable is basalt as a facade material?

How sustainable is basalt as a facade material?

Basalt, the volcanic stone that forms the basis of Rockpanel facade cladding, is a sustainable raw material that is sourced in a responsible way close to our factory. It’s a unique material that offers many advantages, such as fire resilience, high durability, dimensional stability and resistance against moisture. We’ll tell you more about the origin of basalt and how it’s mined.

How Rockpanel facade cladding is produced? From spinning lava to coating the pressed boards: we will take you through the production process of Rockpanel step by step.

One of the many naturally built-in strengths of Rockpanel facade cladding is its fire resilience. And because Rockpanel is firesafe by nature, we don’t need to use toxic fire retardants. We’ll tell you more about how our built-in fire safety contributes to the sustainability of our products.

Read more
Rockpanel & fire safety: why is a high melting point of facade materials so important?

Rockpanel & fire safety: why is a high melting point of facade materials so important?

Rockpanel exterior cladding is made from basalt: a volcanic stone which can withstand extremely high temperatures by nature. This naturally built-in strength of stone is a very important aspect of the fire resilience of our sustainable facade boards.

At Rockpanel, we use the natural properties of stone to create products resistant to the toughest conditions. One of the assets of stone fibres, where Rockpanel exterior cladding is made of, is that it’s resistant to humidity and moisture by nature.

Building in a sustainable way means building for the long run. After all, the longer things last, the more sustainable they become. When buildings are built to last, less new resources need to be used. Rockpanel cladding, made of stone wool fibres, is durable by nature for many reasons.

How recyclable Rockpanel products contribute to a circular economy

Being part of the ROCKWOOL Group, Rockpanel is strongly committed to continuously improve on our sustainability goals. When it comes to sustainability, limiting the use of new valuable resources and reducing waste are very important. Rockpanel products enable you to contribute to that.

Read more
How Rockpanel recycles waste from other industries

How Rockpanel recycles waste from other industries

You will probably know that Rockpanel exterior cladding is made from basalt: a volcanic stone that’s abundant in nature. We use stone wool fibres to create a very solid, yet light-weight board with many natural strengths. But apart from basalt and recycled stone wool content, we also use recycled material from other industries that would often end up as landfill.

Read more
What is an EPD

What is an EPD and how to use it?

EPD stands for Environmental Product Declaration. An EPD is a document in which you can find data about the environmental impact of a certain building material.

Read more
What environmental impact indicators are used for an EPD?

What environmental impact indicators are used for an EPD?

An EPD (Environmental Product Declaration) shows what the environmental impact of a product is during its full life cycle.

Circularity, life cycle assessment, cradle to cradle, cradle to grave, LEED, BREEAM… but what does it mean? We are more then happy to explain it to you.

Read more
How does Rockpanel perform in the BREEAM scheme?

How does Rockpanel perform in the BREEAM scheme?

Read more
LEED certification: what is it and how can using Rockpanel contribute?

LEED certification: what is it and how can using Rockpanel contribute?

Read more
How to obtain a DGNB certification with Rockpanel products

How to obtain a DGNB certification with Rockpanel products

The DGNB (DGNB (Deutsche Gesellschaft für Nachhaltiges Bauen – German Sustainable Building Council) – is one of the most balanced sustainability schemes out there. Their conceptual principles revolve around a holistic understanding of sustainability, and it therefore looks at both environmental, economic and sociocultural factors.

Read more
How can I be sure that a cladding product is sustainable?

How can I be sure that a cladding product is sustainable?

Sustainability is becoming more and more important in the (business) world. As there’s no clear definition on what ‘sustainable’ means, many companies are using the term. Sustainable might mean that a product is durable, it might say something about recyclability, energy efficiency, ecological benefits or about responsible use of raw materials. And in some cases, none of those are applicable to a product. As sustainability is such a broad term, greenwashing is lurking. But how can you tell whether a (cladding) product is sustainable?

Why Rockpanel Woods is more sustainable than real timber?

Wood has always been a very popular material. Not only as furniture and decoration inside and outside your house, but also for building the house itself. Building a house completely made out of wood may seem the most sustainable choice there is. After all, wood is a natural material and you would think that means it’s also sustainable. Unfortunately, the reality is much more complex.

Read more
What is better: a recycled material or a natural material?

What is better: a recycled material or a natural material?

If you’re looking for sustainable building materials, you might get a bit lost between all the possibilities out there. Green buildings, natural materials or recyclable or recycled materials… What is the best option if you want to build in a sustainable way?